At Least I Was Too Busy Worrying About Drowning to Think About Sharks, a Gulf Coast Pre Race Report 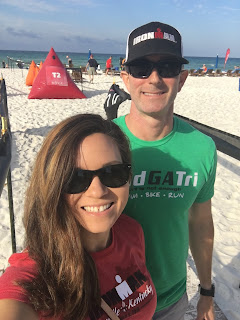 Our alarm went off at 2:30 Friday morning. Jason and I secured the bikes to the car, and by 3:30, we were on our way to Panama City. If you’ve never traveled to the panhandle from central Georgia, you have no idea how monotonous of a drive it is. Thankfully, my sweet husband let me snooze most of the way. Our reason to leave so early was to arrive at the convention center just in time for check in to open at 9:00. Half way through our 5 hour drive and at the end of my little snooze, I suddenly remember that PC is in Central time.  Jason was less than thrilled to find out he could have had an extra hour of sleep. Ooops.

Safely in PC, we found ourselves (big surprise) an hour early. Jason and I went out for a quick little 20 minute jog along nice and flat Front Beach Drive. We took it easy, and it felt like a comfortable, but not quite cool, beach morning. However, by the time we made it back to the car, I was sticky and drenched with sweat. This should have been a sign!

Jason and I then snagged second in line for check in. Maybe it was because we were in Florida, but the volunteers seemed to be mostly retired, and completely precious. They were all super genuine, and appeared excited to meet people and see what this whole “triathlon” phenomenon was all about. 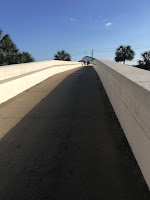 While we were shopping and coveting more M-Dot stuff (because you’re not an Ironman unless you have an M-Dot on you at all times, amiright?), I FINALLY got to meet another online friend of mine, Rebecca. For over a year now, my parents (who live in NC) have been telling me about this girl at their gym who is an amazing swimmer, and super sweet person. We narrowly missed each other last year at Chattanooga Waterfront. I didn’t know she was racing, and overheard her name called during the awards ceremony. If you have ever raced this venue, you know how super-stacked this race is. That was my first taste of what an awesome athlete Rebecca is. Anywho… long story short, we both realized that we were signed up for Gulf Coast. Meeting Rebecca was like instantly connecting with an old friend. (Maybe because we HAD been trying to meet for the past year!)

After a short debate on whether or not to attend the athlete meeting, we decided to be rebels and headed over the pedestrian walkway (we have to bike/run over THAT!?) to transition for bike check in. The wind was blowing so hard, we had to rack our bikes for the night by the bars versus the saddle.  We were nervous about leaving our bikes overnight, as they were forecasting some pretty gnarly storms, but thanks to Ironman rules of no check in on race day, we didn’t have much of a choice. With a little hope, and a whole lot of prayer over our bikes, we started toward the beach for a practice swim.

If you’ve known me for any amount of time, you know ocean swims are not my thing. I’ve completed a handful of ocean-swim tris, and each time, I swear never again. (Never say never.) For some reason, I thought a venue that’s notorious for having rough conditions was the perfect place to try my longest ocean swim yet. I never said triathletes were a sane or reasonable bunch. Friday morning, I stood on the beach trying to ignore the red flags and surf pounding in front of me. Phobia or no, I’m not one to back down from a challenge. 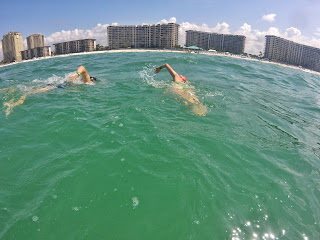 We each decided to forego the wetsuit for our practice swim. My reasoning was that IF in the event the swim wound up being NOT wetsuit legal, I wanted to know that I could live without  the extra buoyancy (aka security blanket). Rebecca, Jason and I, then jumped into the chilly ocean and headed out to the buoy marking the first section of the swim. In the course of 20 minutes, I laughed, sputtered, coughed, swallowed a gallon of water, floated on my back, swam something resembling freestyle stroke, and was flipped around like a shell on the beach.  Once at the buoy, the three of us regrouped, took pictures, and just had FUN. I don’t know at what point I stopped being afraid of the conditions, and just started having fun, but that’s exactly what happened. I didn’t finish that practice “swim” any less nervous about the difficulty of the swim, but I knew that I was no longer afraid to try.

Safely back on the beach, Jason and I said goodbye for the day to our new friend and went to check into our hotel. We were thrilled to find out it was only half a mile away from transition! Our room was on the third floor, and from our window, we had an incredible view of the ocean and swim course. The rest of the day was spent hydrating, packing our transition bags, and of course, everyone’s favorite part-carb loading!

By 5 p.m., the storms had hit…hard. By 8 p.m., the rains and wind just starting to relent, we prepared to crash for the night. Even though the storms had started to subside, the waves, easily seen from our bed, had most definitely NOT.  One of my tri girlfriends, Brande, had texted me, offering support and asking me about the next day’s conditions. Living on the beach and also being a self-proclaimed weather app snob, she knew the best sites to find the surf report. The page she sent me was bleak. It’s probably a good thing I didn’t know right off what it all meant. She explained that yes, it would be 5 foot surf, but there would be 6 seconds between waves, and that was plenty of time to get into a rhythm. I would be just fine, she promised. Okaaaaay. Not exactly at ease, but accepting of the fact that worrying about it wasn’t going to get me through the swim any easier, I got a good night kiss from my husband (who was completely unphased about Saturday’s predictions, of course) and went to sleep. 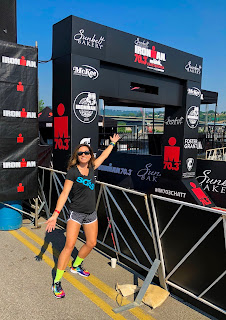 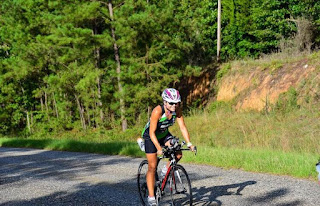 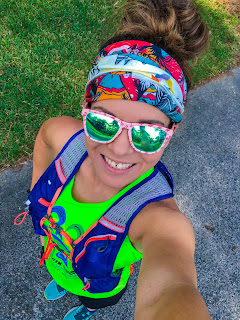